Posted on September 22, 2014 by downssyndromeassociation

Things have been very quiet on the POSEIDON front since I last reported on the workshop which took place in Oslo in January. Families and professionals from Croatia, Italy, Slovenia and Rumania came to Oslo to tell us about their lives and the kind of technology that would help them become more independent.

Since then the developers have been looking at all the evidence from the workshop, interviews and questionnaires and using the information to help them develop new technology. Karde our Norwegian partners have been looking at phone apps which will help with money management, Tellu also from Norway have been developing a navigation app, Fraunhoffer have been working on an interactive table which can be used in the home and Middlesex University and been working on virtual environments which will support people to rehearse new journeys in their own home.

The last weekend in August saw us meet again this time we invited families and professionals from Luxemburg, Switzerland, Portugal and the Ukraine. It was an opportunity to meet new friends and try new experiences.

Printing at the Gutenburg Museum and enjoying a tour of Mainz 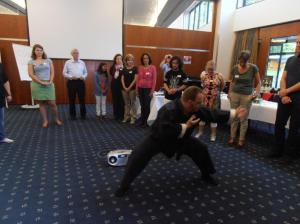 A Tai Chi display from one of our German guests – it was beautiful!    Now which way do I go?

We also worked very hard. There was a a navigation prototype to try. It was set up to guide our guests with Down’s syndrome from the hotel to the Gutenburg Museum and included a bus journey. The navigation app used photographs which popped up to show landmarks along the way. Our guests enjoyed using the app and the general consensus was that the developers were going in the right direction.

On the Sunday morning everyone had a chance to try out an interactive table which could be operated by touch or just movement.

It was clear from discussions which took place over the weekend that there are three main areas where support from technology could make a big difference. Travelling about and having the ability to rehearse journeys, phone apps to help with shopping and general money management and apps to support scheduling and communication throughout the day. This is where the focus will be over the next six months prior to the first pilots. The pilots will take place over the period of a month and involve people with Down’s syndrome and their family, friends and carers using the technology and providing feedback to the developers.

Also discussed at the workshop was the importance of involving as many people with Down’s syndrome as possible. Down’s Syndrome Associations from UK, Germany and Norway have agreed to arrange for focus groups who can meet regularly and give feedback. As Middlesex University are involved from the UK they will be looking to hold these events at national office in Teddington. When there is more information about these events we will post it on the POSEIDON page of the website.